Just look at this marvellous picture, this event was organized in India as you can see the Tiranga is proudly waving in the super cool 'Delhi Breeze'. This event called The World Culture Festival was organised by one of the most reputed NGOs in the world - The Art of Living in New Delhi from 11th to 13th March, 2016.
Before diving into any matter, let's just take a look at some facts about The world culture festival and Art of living.

> Art of living is one of the biggest and reputed NGOs in the world and people from more than 155 countries follow and practice the techniques taught by its founder 'Sri Sri Ravishankar'. > World culture festival was organised to celebrate the completion of 35 years of AOL.
> It was hosted on the world's largest floating stage of 7 acres. and it brought together 3.75 million people from more than 150 countries at single place and more than 1.8 billion people from 188 countries watched the event online.
> Sri Sri Ravishankar has conducted meditation for the world peace and probably it was the largest gathering to attend the meditation in the world.
> Delegates and VIPs have come to the Indian soil and India has earned so much wealth and respect too. Click Here To know more about The World Culture Festival.

Role of NGT during WCF2016:
You must have seen all these 'Typical Bollywood Movies' where a goon tries to harass the lead role and in the end, truth wins. Same story happened with The World culture festival. Art of living obviously has taken all the required permissions to held this huge event before a long time but suddenly, few days before the event NGT has put the big fat fine of rs. 120 crores on the NGO stating that due to this event, Yamuna riverbank will be damaged permanently. but art of living had the legal thing called 'Permission' to held the event so it was not possible to prove scientifically that AOL can not held the event so they played the media card and they have tried to ruin AOL image in front of the world and took 5crores in the name of development.
What happened later on was horrifying, all you should know is there was no scientific base behind NGT's report and they have admitted it themselves. (See the below documents, Source: Quora). 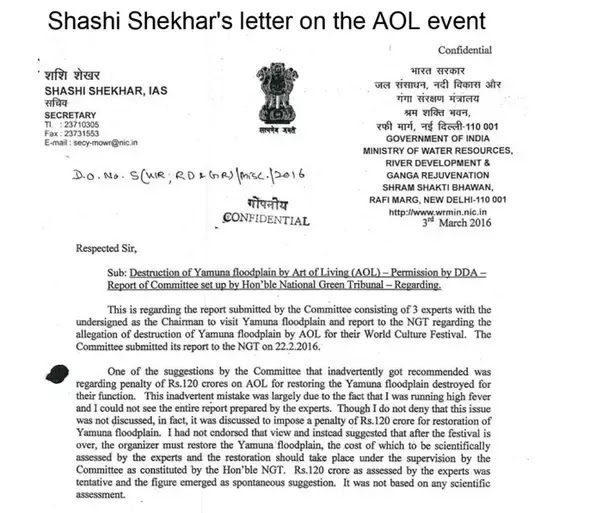 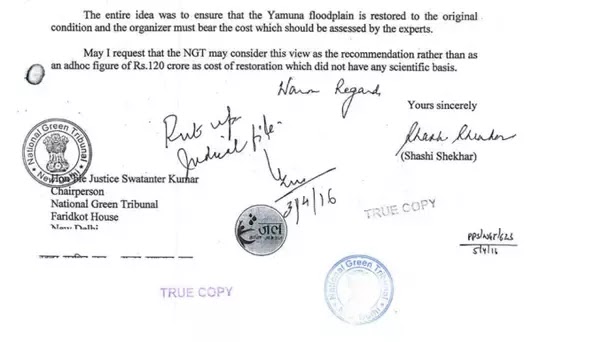 They have no idea what they are doing and just forgot the basic thing called SCIENCE. while preparing the report. But it was too late for them to apologise and they failed miserably to stop the event so since then, they  are trying to spoil the art of living's image.
Basically no one knew about the NGT before the world culture festival, and WCF gave them a big fame. Recently they are telling that AOL has to pay 43 crore rupees for the damage caused to the Yamuna bank due to the WCF. After this report, the art of living has openly challenged their report. (source). And also Sri Sri has invited the environment activist and scientists to do their research on this matter. So I am sure that truth will surely prevail and people from all over the world will see the dark face of NGT. But it is a tragic phase for some good people from NGT and of course it is very tragic that India's reputation got damaged due to their foolish act.

According to me, NGT people do not have basic courtesy to investigate any matter properly and it is poorly managed organization and waste of public funds. We are lucky that we got to know about them through WCF incident, just think of some less popular event which was ruined by poorly managed NGT. All they need is to practice The art of living and Sudarshan Kriya. I would highly recommend Happiness Program for all the NGT members and I am more happy to teach them the course (FYI: I'm an AOL faculty).

P.S. Glimpse from myside at The World Culture Festival